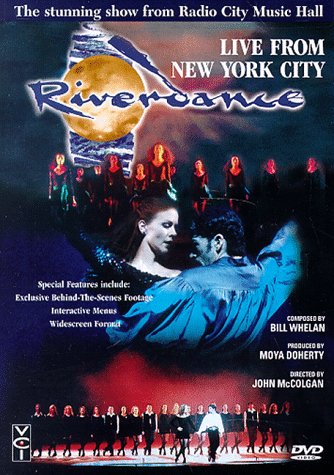 Riverdance, the Irish hard-shoe sensation that took PBS viewers by storm, underwent its second incarnation with Live from New York City, a 1996 performance filmed at Radio City Music Hall. While most of the attributes from 1995's "i"Riverdance: The Show remain--the dazzling ensemble choreography, Bill Whelan's energetic score, and the New Age-y view of Celtic mythology--the most significant difference is at the top, where Colin Dunne replaced bombastic lead dancer Michael Flatley. Though lacking Flatley's bravura, Dunne is a superb technician who works well with Flatley's former co-lead, Jean Butler. Flamenco dancer Maria Pagis returns, as do the Riverdance Singers (formerly known as Anuna) with soloist Katie McMahon and the orchestra with fiery fiddler Eileen Ivers.

About a half-hour longer than the 1995 original, Live from New York City expands upon the second act's theme of the Irish leaving their homeland for other parts of the world. "Lift the Wings" becomes a set piece for the people who are saying goodbye (it's hard not to miss the original's solo voice of Aine Um Cheallaigh), and a new song, "Heal Their Hearts," is a showcase anthem for bass Morgan Crowley. In the most engaging new number, "Trading Taps," a trio of Irish dancers faces off against two urban American tappers. While much of this follow-up show will be familiar to those who know the original, it's different enough to be enjoyed on its own terms. It's also more stylishly shot, but that's also its biggest drawback--frenetic editing that allows only brief glimpses of the dancers and leaves the viewer dizzy. --David Horiuchi

The DVD offers a minimally informative 11-minute promotional video consisting mostly of performance clips and a text version of the story, numerous text biographies of the performers (including instrumentalists), Dolby Digital 5.0 and 2.0 sound, and an anamorphic widescreen picture. Inconveniently, the disc is two-sided, with one act on each side. --David Horiuchi

MORE INFO
HOME TOUR
Floorplans and pricing available.
Located near 12 miles of hiking trails, and the beautiful beaches of Lake Michigan, Harbor Village is the perfect location for your vacation home. Located just 90 minutes from Chicago, you are just a short drive away from Living the Resort Life.

Plank’s Tavern On The Water

You have Successfully Subscribed!

The Inn offers 92 luxury guest rooms, a myriad of dining options, full service spa, indoor and outdoor pools, fitness center, state-of-the-art meeting rooms and wedding venues for up to 300 guests. High rise condominiums are also available for those who want to live a resort life.


LIVE THE RESORT LIFE, BE A

HOMEOWNER
FOR A DAY